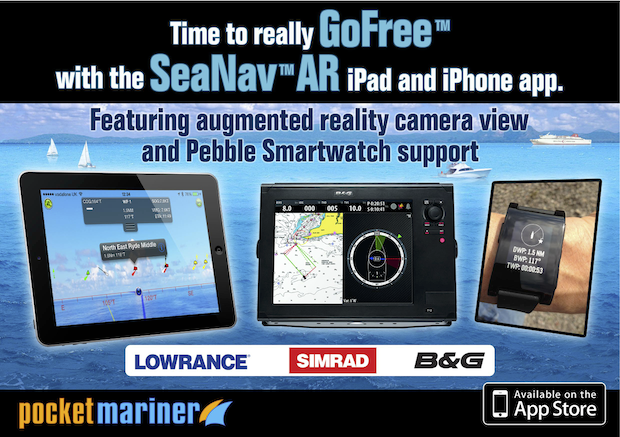 SeaNav now hooks up with Simrad, Lowrance and B&G MFD’s via WiFi GoFree  and can use all the live navigation data including Position, AIS, Wind and Depth to display on your iPhone , iPad or Pebble Smartwatch wherever you are on your boat. We’ll be at the METS trade show in Amsterdam November 19th -21st . Come and see for yourself and try out the Pebble Smartwatch too – METS 2013 – stand(s):01.120, 01.147 Our unique AR view mode allows you to view buoys, lights, ships, waypoints and track overlaid on your iPhone or iPad live camera view. With “AR LockOn” you can select a target on the chart and then be guided to it in the AR camera view.

Tap the “eye” icon at the top left to switch AR mode on, then tilt your device up to see a live camera of the scene and boats around you. As you turn round and view buoys and ships, their name, range and bearing will popup when they are in the center of the view. You can also tap on them to get more information. Tilt back down to see the map view. Tapping the “eye” icon again turns AR mode off. You can pinch to zoom the map or camera views.

In AR mode our unique “AR Lock On” feature lets you select a ship or buoy on the map view and then easily locate it in the Camera view using a grey arrow to tell you which way to turn to spot it when its not directly in view. Your course (yellow line) and route to next waypoint (blue line) will also be visible overlayed on the camera view.

Ships are color coded based on their type e.g. Sailing boats are white, Pleasure Craft magenta, etc. See the Map Legend for full details. A vector points forward showing where each boat will be in 2 minutes time based on its current Speed and Course. Ships move in real time across the map and in the AR view. Tap on a ship or buoy to get more information and tap on the right arrow to get even more including speed, course, distance, bearing, picture etc. The horizon is set by the zoom scale of the chart view – e.g. zoom out on the chart view to see further out in the Augmented reality view.

AR photo from the Isle of Wight ferry.

We took  Sarita, my 27′ catamaran out to test the latest versions of SeaNav and Boat Beacon at sea in the Bristol Channel. The planned route was a 6 hour passage on the ebb tide from Chepstow to Cardiff (see SeaNav route plan below). 3 persons on board;  Captain Keith Avery of the RSS Discovery  ( see the excerpt from Sarah Casey’s book – the Wave  ) , our Vicar, also an ex-merchant navy officer and myself.  Illustrious company.

The trip went well and to plan until we were just off Portishead where strong wind against tide made the going very uncomfortable and slow.  As we didn’t have to get to Cardiff that day we decided to stop over in  Portishead.  Boat Beacon transmitted our position faithfully and my family tracked our progress live on our Boat Watch app and the web  ( http://boatbeaconapp.com/go/MMSI ).  Captain Avery helmed most of the way and was  impressed with our apps. Check the screenshots below for the route, track and web views. The blue line and pins are the planned route and waypoints, the white dotted line is the recorded track. You can  see the exact pontoon we tied Sarita  up at in Portishead Dock!

The Wave: In Pursuit of the Rogues, Freaks, and Giants of the Ocean A popup will show. Select “New route” from the popup by tapping the button. Then tap and hold for about a second anywhere on the map to put down a waypoint/marker. Don’t worry about being precise, you can drag and drop the pin by placing and holding your finger over it , to where you want it.  If you quickly tap the pin a popup will display its name (WP1) and Lat and Long with a red cross to delete it on the left (you can’t delete it if its the only pin – you can delete its route later). Tap the blue arrow on the right of the popup to change the name of the marker. You can also edit the name of the route by tapping in the name box at the bottom where it says “Route1”. When you are done setting up your marker, tap Done, bottom right and you now have a route set up. You can of course add as many waypoints/markers to a route as you wish and you can add as many routes as you wish. After tapping Done this route will now be your active route. Tapping the route button again will let you add another route or edit your existing ones including selecting a route if you have many set up. When you have a route selected and displayed and then tap the Sailing button, SeaNav will enter navigation mode and show the name, distance, bearing, Cross track error  (arrow at the top on the left pointing which way to steer to get back on track and how far off direct track you are), velocity made good towards the waypoint (VMG) and Estimated Time of arrival (ETA)  to the closest Waypoint/Marker as well as your course (COG) and speed (SOG), updating it in real time as you navigate. SeaNav will also sound an alert when you get close to a Marker. We hope this helps, please let us know if it does or if you have any questions/suggestions – you can email us at help@pocketmariner.com
There is also quite an extensive user guide and FAQ in the app (tap the i button far right at the bottom)  and also via this web page:-
http://seanav.net/help.html

SeaNav ® lets you explore, plan and navigate your boating trips in real time and outstanding high-resolution using the latest Digital Vector Marine charts covering the US & Great Lakes or UK and Ireland.

Buy once and use on both your iPhone and iPad devices. SeaNav works in high-resolution on your iPad and iPhone without having to buy an additional HD version.

SeaNav has two versions, SeaNav US which uses NOAA charts and provides complete coverage of USA and Great Lakes.SeaNav UK uses UKHO charts, and offers complete coverage for UK and Ireland. Both versions are available from the App Store on your iPhone or iPad.